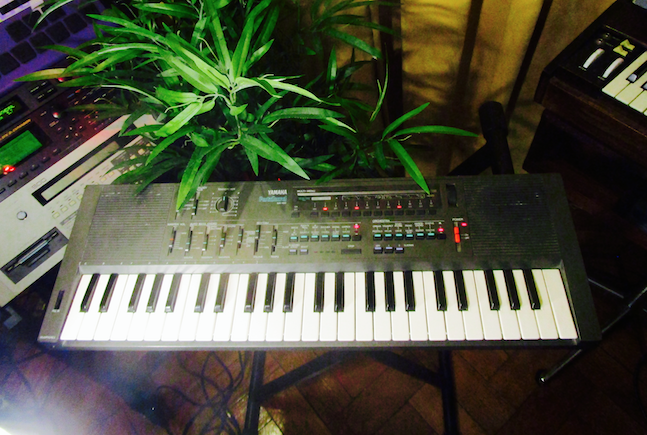 12 december 2017 – Got this from the cult dutch electronic music artist Phochos yesterday, the YAMAHA MK-100 – A 1983 homekeyboard with some synthesis functions and a very cool 1 pattern programmable ‘drummachine’.

listen to some sounds from this instrument (with some ableton ping pong delay & reverb FX  etc. added)

The coolest thing is that it hasn’t got a screen for “programming” the functions – instead it uses a rotating cilinder behind plexiglass on which you can see the different menus printed. A very clever and jaunty system that seems to come straight  out of a 1950’s Tupolev navigation computer. 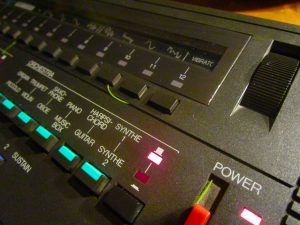 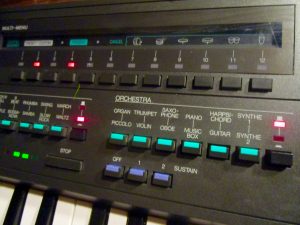 The synth sounds are pretty bland yet very ‘warm digital’ – reminiscent of rudimentary FM sounds. The more lighthearty bellish sounds have the most character and the electric piano has a sweet dusty jazz aura somehow. Put this keyboard through an analog filter to soften its tangy frigid bite and add some delay/reverb and the sun really starts to shine.

The synthesizer method is a bit mysterious – based around an obscure Yamaha IG10771 Custom ASIC chip and an Intel 8085 processor. It does sound like early FM but it isn’t – it uses what is best described as a sort of “digital wavetable recombination synthesis” According to this website: “Interesting pre-FM soundsource, with sweet noisedrums and high polyphony (I think it was 12 or 16). Massive 64-pin shrinkDIP. Contains slow ADC for battery-low checking, metronome led driving (oddly specific!), rhythm tempo IRQ generator, internal key frequency lookup table, and a single-loop wavetable ROM. Envelope and waveform is also set by just a preset variation (in chip registers) instead of true ADSR.”  In normal mode the synth part is 8 voice polyphonic but when the bass/chord voices are switched on the synth part becomes 3 voice polyhonic – the other 5 voices on the chip are then used for the drums, bass and 3 voice chord parts. You can also turn on a quaint chord memory function called “melody plus – Duet” or either “trio” resulting in one key playing either an interval or chord.

The ‘synthesis’ functions are extremely crude – you can mix 2 preset sounds together and choose from four different waveforms for each one. The envelope generator only has a meagre effect: you chose from 8 different preset envelopes and then it gets either a bit shorter, a bit more staccato, or slighty more stringy – nothing too extreme. There is a vibrato function too that adds slightly more uh…vibrato. The sustain has 2 rather nice settings with a good long release tail. It is possible to program your own rhythms and basslines so thats pretty sweet.

A thing that sucks is that the keyboard/synths sounds are rather loud compared to the drummachine’s volume. There is no way to alter the relative volume of the keyboard/synth sounds – You can do it for the rhythm and bass/chord channels but that doesn’t really fix the problem because the keyboard sound will always be as loud as the main volume. I guess this is easily hackable with some circuitbending or just multitracking.

The drummachine part is fun,. Six sounds of which the snaredrum and tom are (almost exactly?) the same.  Extreme robotic electrofunk vibes and a thight groove. You can easily make your own pattern by tapping in the rhythm – it auto quantizes too…and you can make a variation with the fill in button next to the keyboard. 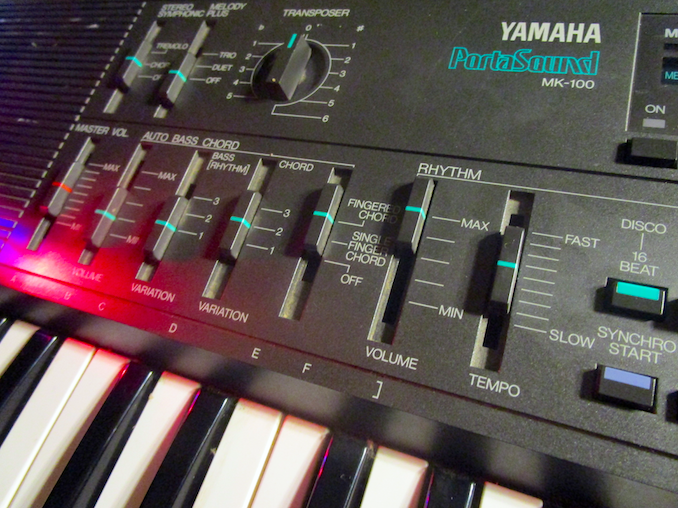 On the top middle left you can see the Transposer, this makes for a cool makeshift ‘step’-pitchbend great for amateur space jazz freak out solos while holding down a chord…

Here is some more info about the MK100 and here are some more sound demos: