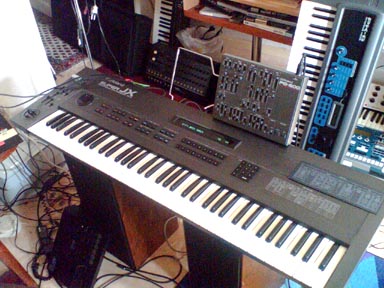 This was the flagship synthesizer from Roland in the mid 80s…when it was good and big Roland liked to put the SUPER tag on it. The SUPER JX is big and luxurious on the outside but inside its a bit of a rag-tag ramshack example of a product that (probably) had to be put together on a deadline.

The big sleek Super JX contains 2 JX8P circuit boards inside, and apparently it got its 6 1/2 octave keyboard so these boards would actually fit. Maybe thats an urban myth, but the keyboard plays pretty nice, like you are playing a pack of butter. Unlike the JX8P the JX10 can’t recieve MIDI sysex information, so programming it with a MIDI controller or editor is impossible….the only solution is to go with the PG800 programmer or the (kind of) tedious button interface on the synth itself.

Some sounds from the Super JX10:

noodling with a bass sound

A lazy attempt doing a save a prayer arpeggio

go back to synthesizer page