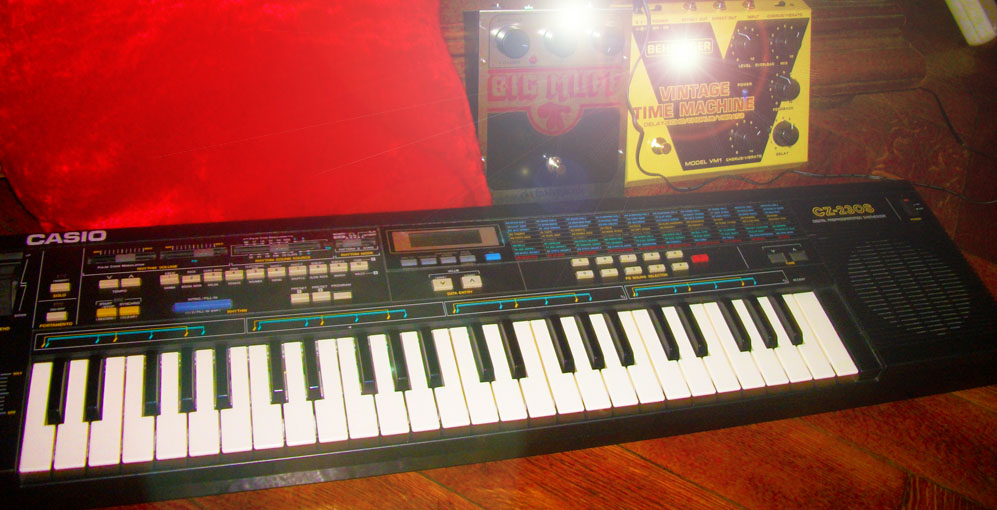 Since the 1990s I’ve been using Casio CZ synthesizers with its distinct plastic yet warm wooley sound from the thick Squadra Blanco basslines to esoteric jearking pads or freaky techno bleeps  it was either the giant CZ1 flagship or its little mini sibling the CZ101 (which is probably also the most well known you can read more about it on Orgue’s website). I knew of the CZ3000, 5000 and maybe the 1000 and its later more advanced VZ-series descendends. So little did I know there was a weird exotic misformed mutant in the CZ series called the CZ230S until my buddy Phochos sold me one last week

Enter the 1986 Casio CZ230S “DIGITAL PREPROGRAMMED SYNTHESIZER“…I was quite curious about its tagline,  we all know it is digital as it uses the Casio 80s Phase Distortion synthesis a kind of FM synthesis but then more  plasticy and warmer sounding, we all know its a synthesizer too but what the hell does pre-programmed mean!??

Exactly what it sais: its already programmed for you so you don’t have to program it! In other words this is a preset CZ with a lot of the same presets that are on the other CZ’s…basicly its a Casio Keyboard with a lot of cooler sounds then usual. You can’t edit them (only via MIDI in theory) but inside is a complete CZ engine with 99 hardboiled presets.  Apart from these exciting 99 presets it also has a Drummachine/Rhythm part and a supercool multitrack stepsequencer…and a build in speaker too!

The sequencer is really cool: a TR-esque step sequencer you can program with the keys, 12 tracks for the drums  and 4 for the synthesizer parts…perfect for weird dystopian freaky robotic grooves

Check out some all 100% CZ230S sounds going thru my Behringer VM-1 Vintage Time Machine Delay:

CZHouseDownz Showing off the step sequencer