What we have here is the usual 6 voice analog 2 oscillator synth with some exotic modulation routings and some fancy multi stage envelope generators. Not quite an Oberheim Matrix 6 in its synth modulation capabilities but coming close – and on some fronts even superior. A broad range of sounds is possible and its all there; haunting strings, eerie pads, deep monophonic portamento moog basses and leads, fine harps, metallic stuff, low-end brass etc. All with a very good character, tight and compact…a good punch but also enough warmth..Actually this synth sounds pretty darn excellent! I am pretty sure its got faster envelopes then a Matrix 6 and also sounds less gritty/grainy/plasticy.  Programming is done with a typical 80ies numerical interface – sluggish like on the Oberheim matrix 6.

Probably not many were made but due to the fact that its analog power is hidden behind a poor blocky akward interface design it hasn’t fetched crazy prices on the synth market yet.

Programming is not the only thing that is sluggish on an EK22, it can’t cope with MIDI very well when it is playing. Try changing some parameters when it is being sequenced by MIDI and it will slow down, missing notes and say take it easy please! There is a knob on the ELKA that sais MIDI on/off and that might not be a luxury.

At times the programming interface is quite cryptic (as is the manual, some things are never fully explained) and feels a bit shabby, not entirely finished and too “technological”, i.e. there has been no regard to any friendly interaction design, but after a while you get the idea and it ain’t too complicated. 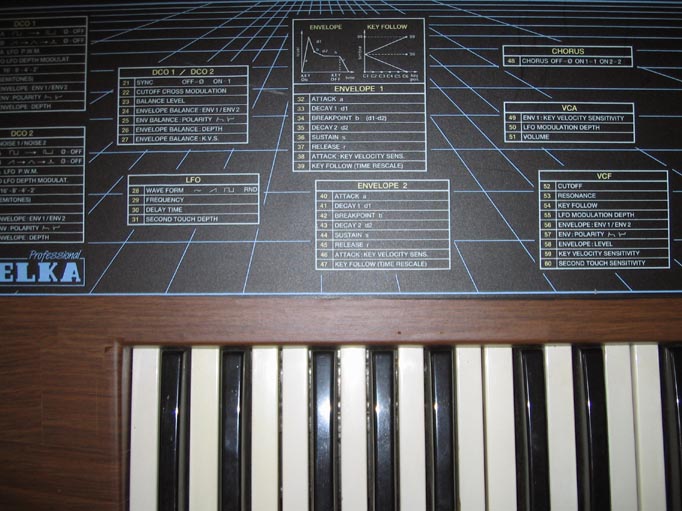 Some mp3 snippets I made from the Elka (recorded withouth any effects):

Haunting Brass & Strings Sloppy slow attack bass sequence reminding us of an other Italian synthesizer called the BIT, with some strings/pads layered behind it

Panoramic analog strings The sizzling wonderfull built in chorus poors a broad sauce over everything, almost an Elka Synthex!

Moogish solos leadbass The lower part of the keyboard is sequenced with a baseline while I play a moogish lead over it with the other side.

Experimental sound effects flow into dark pads and synth noodling Some random stuff going through some presets. distorts a little now and then because the recording went into the red.