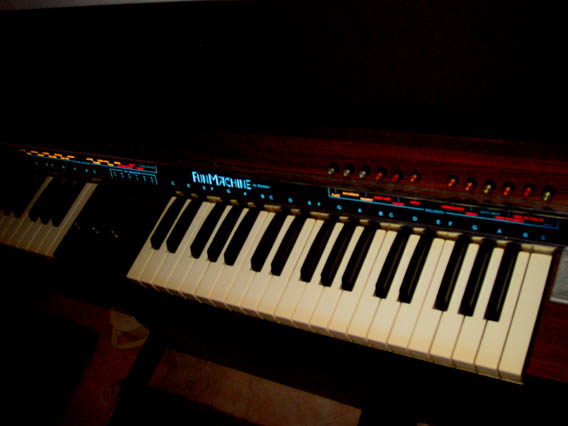 A strange obscure proto-preset synthesizer/combo organ with build in drumbox from 1974. It would fit a Blackpool dancehall perfectly or a Finnish tango bar…you get the idea. Its not really an organ though but also not a synthesizer…its a “fun machine”…an obscure and very exotic piece of keyboard history.

With the knobs you can choose/program some presets and put an ASR (Attack Sustain Release) envelope or an autowah effect over it. On the leftside there is a little bass keyboard which plays bass-riffs and on the right you can play the fully polyphonic organ/preset synth part. The drumbox has some nice analog rhythmbox patterns. Its got lots of blue lights and a big build in speaker for a warm wooly sound.

There is little information on the Fun Machine, but I have heard rumours that there were several versions, like really big ones for theaters and ones with build in tape recorders. The Baldwin company makes mostly pianos and organs and comes from Ohio, USA. On the Baldwin homepage it sais “1974 The Baldwin FunMachine, a popular easy-to-play electronic keyboard, is introduced.” Thats about all the information there is.

An mp3 of me playing the Funmachine: 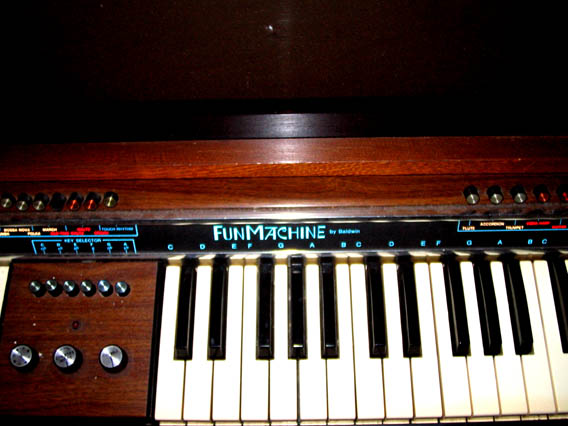