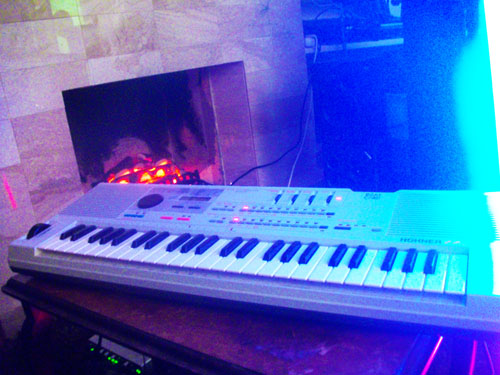 In the late 1980s the German accordion manufacturer Hohner started to license a number of Japanese  synthesizers and Samplers from Casio. One of them was the Casio HT700 which they painted creme white (like all Hohner licensees) . They changed some presets and behold, the HOHNER KS49 was born A real analog digital hybrid – 32 digital waveforms going through a juicy analog filter

This sounds exciting and on paper could be a straight competitor against 80s analog digital hybrid exotics such as the Ensoniq ESQ1, Prophet VS and more modestly the KORG DW8000…well not quite..This thing is quite obscure and it is also a Synthesizer-KEYBOARD hybrid (build in speakers, auto chord, drums) and that means it can be picked up  for anything from 50 to a 100$ because most people still think its just a cheap 80s keyboard and not an exotic analog rarity.

Well its not that quite either. The KS49 is an extremely simple polyphonic synthesizer, 1 oscillator going  through a VCF,  Two envelopes: one for the VCF and one for the VCA. There is an envelope depth parameter,  a simple LFO with 4 waveforms and a chorus effect. It is also paraphonic (which means it doesn’t retrigger the filter this is definitely not a bad thing because this comes with an unique “flow” and smoothness in the sound) There is an automatic accompaniments and drum section, with its own (very feeble) bass and simplified synthesizer section.

Programming the synthesizer kind of sucks its not really that hard you just have to tediously wiggle with the data-dail…Fortunately there isn’t much to edit so 30 seconds of your time can already give you quite a mesmerizing new sound. It really sucks at bass-sounds because the lowest octave of the DCO’s doesn’t really go that low.

I can say the following about the sound:
cheap but not crap, sometimes with some sparkling dust from an ancient 70s ARP or Polymoog…Thin yet not cold, on the verge of crispering electricity Hollow yet filled with full fat whipped cream. Its envelopes ingurgitated with intense compulsion yet gleaming with an enthusiastic glow…Like a high class glaced potato drowning in a bowl of instant vanilla custard powder.

Listen to some sounddemos I made on this nice little synth
(All 100% Hohner KS49 + some analog delay): 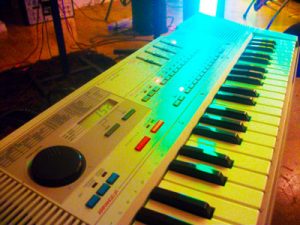